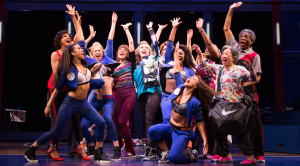 Paper Mill Playhouse, along with Sony Masterworks Broadway, announces the July 19 release of Half Time (Oringal Cast Recording), with music by Matthew Sklar, lyrics by Nell Benjamin, and additional music by Marvin Hamlisch and Ester Dean.  Available for preorder now, the album features music from the Bob Martin and Chad Beguelin-written musical, which made its 2018 debut at Paper Mill Playhouse and tells the uplifting true story of ten New Jersey seniors with extraordinary dreams.

The Half-Time (Original Cast Recording) features some of the last songs written by Pulitzer Prize and Tony Award-winning composer Marvin Hamlisch, who passed away during the show’s early gestation.  The album also features a who’s who of Broadway talent, including five-time Emmy Award-nominated actress Georgia Engel (“The Mary Tyler Moore Show,” “Everybody Loves Raymond”), Tony and Emmy Award winner Lillias White (“The Life,” “Sesame Street”), Tony and Drama Desk Award winner Donna McKechnie (A Chorus Line) and Emmy Award winner André De Sheilds (The Wiz), who most recently won a Tony for his role in Hadestown.  The Original Cast Recording is dedicated to the memory of Georgia Engel.

Based on the motion picture Gotta Dance, directed, written and produced by Dori Bernstein, Half Time tells the incredible true story of ten determined dreamers who audition to dance at half time for a major basketball team, inspired by the true story of the Brooklyn Nets NETSational dance team. They have three things in common: they love to dance, they have something to prove, and they are all over 60. Only after making the cut do they learn they won’t be dancing tap, salsa or swing—instead, they will bring down the house with a style that is entirely new to them: hip-hop. Take the uplifting journey with these dreamers—and the young coaches who inspire them along the way—as they battle self-doubt, stereotypes and even each other for a chance to bust a move at center court in front of 20,000 screaming fans. Together they remind us that in life, when the odds are stacked against you and the challenges seem too great to overcome, it’s not the end of the game—it’s Half Time.

Half Time is produced by Dori Berinstein and Bill Damaschke.