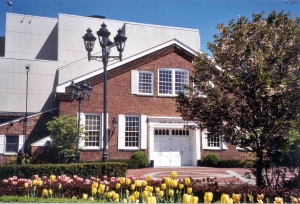 Paper Mill Playhouse will open its 2019–2020 season with a highly anticipated new musical about one of the world’s most beloved entertainment icons. Chasing Rainbows: The Road to Oz (Sep 26–Oct 27) is the story of how five-year-old Frances Gumm became Judy Garland, chronicling her early career from vaudeville to her rise at MGM, where she wins the role of Dorothy in The Wizard of Oz. Next, a dash of fairytale romance, magical onstage transformations, and of course, glass slippers in this family musical just in time for the holidays, Rodgers + Hammerstein’s Cinderella (Nov 20–Dec 29). This enchanting, Tony-nominated Broadway adaptation of the beloved musical will put a spell on audiences of all ages. Next winter, Paper Mill Playhouse presents the world-premiere musical Unmasked: The Music of Andrew Lloyd Webber (Jan 30–Mar 1), about the remarkable life and celebrated work of Andrew Lloyd Webber. Unmasked will feature new material and rediscovered gems, along with the history of their creation intertwined with Andrew’s extraordinary personal story. In the spring, Paper Mill Playhouse welcomes back our good friend and eight-time Oscar winner Alan Menken with his Tony-nominated musical Sister Act (Apr 1–Ap 26). Based on the 1992 hit film, this feel-good musical follows Deloris Van Cartier as she goes into hiding in a convent—where she clashes, hilariously, with cloistered life. Deloris inspires the sisters with her soulful style, but the church choir’s newfound fame attracts some unwanted attention. Paper Mill Playhouse closes its 81st season with the world-premiere musical The Wanderer (May 28–Jun 28), the story of Dion DiMucci and how he skyrocketed to fame as a teenage heartthrob in the 1950s and early ’60s with hits like “Runaround Sue,” “Teenager in Love,” and “I Wonder Why.” Now, his extraordinary journey comes to the stage in a moving and intimate new musical.

“Paper Mill Playhouse is thrilled to produce two world premieres and a New Jersey premiere as part of our all-musical lineup. Producing new works is central to our vision of becoming recognized as one of the most important incubators of new musical projects. We’re opening our doors to collaborate with and host the top talents of musical theater, both established artists like Andrew Lloyd Webber and up-and-coming playwrights and composers.

–Mark S. Hoebee, Paper Mill Playhouse Artistic Director
“Paper Mill Playhouse’s 2019-2020 season is one of the most exciting lineups in our theater’s history, and that’s thanks in large part to the support of our loyal subscribers, who take this journey with us every year. We hope even more people will join us next season and enjoy such benefits as access to the best seats in the house, at the best prices, before we sell out. With the support of our subscribers and donors, Paper Mill Playhouse can continue to be a leader in creating and producing world class musical theater.

“Paper Mill Playhouse delivers high-quality, engaging performances to broad audiences. By making good theater accessible, Paper Mill enriches our local communities,” said Investors Bank Chairman and CEO Kevin Cummings. “But most importantly, it provides unique educational opportunities to more than 40,000 students each year and continues to offer invaluable experiences that would not otherwise be available to them. Arts education is key to the development of our children and young adults.”

Paper Mill Playhouse will produce eight performances a week, Wednesday through Sunday. Three, four, and five-show subscription packages are available now starting at just $111. Each subscription package includes a different level of special benefits, click here for details. Youth subscriptions are available for children ages 4–18 with the purchase of an adult subscription with accessible discount pricing. Single tickets will go on sale on August 19 starting at just $35. Groups of ten or more can receive up to a 40% discount on tickets and should call 973.315.1680. Titles, casting and dates subject to change.

This highly anticipated new musical about one of the world’s most beloved entertainment icons, Chasing Rainbows: The Road to Oz is the story of how five-year-old Frances Gumm became Judy Garland, chronicling her early career from vaudeville to her rise at MGM, where she wins the role of Dorothy in The Wizard of Oz. Chasing Rainbows features legendary songs, including “Over the Rainbow,” “You Made Me Love You,” and “Everybody Sing.” The show has already earned praise from Liza Minnelli, who said, “My mother said that her biography is in her music, and now a talented creative team is using that music to tell the story of her early years and her extraordinary rise to fame.”

This enchanting, Tony-nominated Broadway adaptation of the beloved musical will put a spell on audiences of all ages. Rodgers + Hammerstein’s Cinderella showcases some of the songwriting duo’s loveliest tunes, including “In My Own Little Corner,” “Impossible/It’s Possible,” and “Ten Minutes Ago,” as well as some new characters and surprising twists. Add a dash of fairytale romance, magical onstage transformations, and the iconic pumpkin and glass slippers—and you’re guaranteed to have a ball!

One of the most successful musical theater composers of all time takes audiences on a behind-the-scenes journey in Unmasked: The Music of Andrew Lloyd Webber. Written with Richard Curtis and directed by Laurence Connor, Unmasked is a not-always-reverential look at Andrew’s life and musical career. You’ll hear his best-loved work, including classics from Jesus Christ Superstar, Evita, Cats, Phantom of the Opera, and Sunset Boulevard, in sometimes new and unexpected ways. This new production will also feature new material and rediscovered gems, along with the history of their creation intertwined with Andrew’s extraordinary personal story.

Based on the 1992 hit film, this feel-good musical comedy smash sizzles with powerful music, spectacular dancing, and a story brimming with heart. The madcap plot is set in motion when disco diva Deloris Van Cartier witnesses a murder and must go into hiding in a convent—where she clashes, hilariously, with cloistered life. Deloris inspires the sisters with her soulful style, but the church choir’s newfound fame attracts the attention of the bad guys. Featuring original music by Tony and eight-time Oscar winner Alan Menken (Newsies, Beauty and the Beast, Little Shop of Horrors), the musical was nominated for five Tony Awards, including Best Musical.

Dion. One name set the standard of cool for a generation. But how does a kid from the Bronx make it to the Rock and Roll Hall of Fame? In The Wanderer, the incredible musical journey of a troubled young man turned teenage heartthrob (and, ultimately, rock and roll icon) is told in intimate and no-holds-barred detail. Dion’s music helped define a generation of rock and rollers. His lifelong battle with addiction shed a stark light on the darker side of fame and success. This musical takes both subjects head on, set to the iconic sound of an incomparable era in American music, and celebrates the triumph of the human spirit against all odds. The Wanderer is the riveting true story of Dion, New York’s rebel king, the man Bruce Springsteen calls “the link between Frank Sinatra and rock and roll.”

Paper Mill Playhouse offers its audience an opportunity to enhance their theater experience with behind-the-scenes views of mainstage productions.  Have you ever wanted to sneak a peek behind the curtain? Or wondered what the director was thinking, or how the cast prepares for a show? Join us for one of many revealing insider’s experiences.

Paper Mill Playhouse offers people with disabilities the opportunity to see live theater with dignity and independence through a myriad of award-winning access programs and services, including audio description and sensory seminars for the blind, Braille and large-print programs, American Sign Language interpretation for the deaf, open-captioning for those with hearing loss, and assistive listening devices. In addition, Paper Mill Playhouse provides autism-friendly performances of both mainstage and children’s shows throughout the season. Rodgers + Hammerstein’s Cinderella will feature an autism-friendly performance on Thursday, December 26, at 1:30PM.

PAPER MILL PLAYHOUSE, a not-for-profit arts organization under the direction of Mark S. Hoebee (Producing Artistic Director) and Michael Stotts (Managing Director) and recipient of the 2016 Regional Theatre Tony Award, is one of the country’s leading regional theaters.  Paper Mill Playhouse programs are made possible, in part, by funds from the New Jersey State Council on the Arts, a partner agency of the National Endowment for the Arts. Paper Mill Playhouse is a member of the National Alliance for Musical Theatre, the Council of Stock Theatres, and the New Jersey Theatre Alliance.