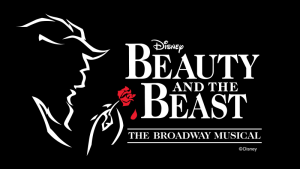 Singing teapots and candlesticks, an evil spell, and an unlikely love story are all part of the magic of Disney’s Beauty and the Beast, an international sensation that has played to more than 35 million people in 13 countries. Based on the Academy Award–winning animated feature, the stage production includes all of the original songs from the movie by Alan Menken and Howard Ashman, plus additional gems by Menken and Tim Rice. The whole family will be enchanted by this gorgeous production, featuring stunning costumes and sets, spectacular dance numbers, and, of course, a fairy-tale ending.

Belinda Allyn (Belle) is thrilled to be back at Paper Mill Playhouse! She was previously seen at Paper Mill as Maria in West Side Story and recently as the standby for the leading ladies in Benny & Joon. Other credits include Allegiance (Broadway), understudy Imelda in Here Lies Love (Seattle Rep), Maria in West Side Story (Riverside Theatre), and Mrs. Claus in the Radio City Christmas Spectacular (NYC). Graduate of Oklahoma City University.

Stacia Fernandez (Mrs. Potts) is so happy to return to Paper Mill, where she previously appeared in Annie and Bandstand.  Broadway: Beauty and the Beast (Mrs. Potts), Mamma Mia!, The Drowsy Chaperone, Swing!, The Scarlet Pimpernel, Tom Sawyer. Regional: Reno Sweeney in Anything Goes, Aunt Cleo in A Sign of the Times, Diana in Next to Normal, Adelaide in Guys and Dolls,  Mrs. Anna in The King and I, Grizabella in Cats. Film: Enchanted, Shaggy Dogg, Captain America, Frozen 2. As a playwright, she has written The Loop and A Smalltowne Christmas.

Kevin Ligon (Cogsworth) last appeared at Paper Mill Playhouse in the 1988 production of Mack and Mabel. He recently appeared on Broadway in the smash-hit revival of Hello, Dolly! as well as On the Twentieth Century; Bullets Over Broadway; The Phantom of the Opera; Sister Act; Finian’s Rainbow; Young Frankenstein; The Producers; Kiss Me, Kate; 1776; and The Secret Garden. Other credits include Anastasia (Hartford Stage Company), Max in The Sound of Music (Alabama Shakespeare Festival), Mr. Bumble in Oliver! (Pioneer Theatre Company), Adolfo Pirelli in Sweeney Todd (Kennedy Center’s Sondheim Celebration), Nicely-Nicely in Guys and Dolls (national tour—Jeff Award), Forbidden Broadway (Off Broadway).

Howard Ashman (Lyrics) wrote the lyrics for the Disney animated films The Little Mermaid, Beauty and the Beast, and Aladdin (three songs). With composer Alan Menken, he received two Academy Awards and two Golden Globes for Best Song (“Beauty and the Beast” and “Under the Sea”) and four Grammy Awards. He was author, lyricist, and director of the stage musical Little Shop of Horrors as well as the screenwriter for the film adaptation, which earned an Oscar nomination for Best Song.

Tim Rice (Lyrics) has worked in music, theater, and film since 1965, when he met Andrew Lloyd Webber, a fellow struggling songwriter. Their collaborations include Joseph and the Amazing Technicolor Dreamcoat, Jesus Christ Superstar, and Evita. Tim has also worked with composers such as Elton John (The Lion King, Aida), Alan Menken (Aladdin, King David, Beauty and the Beast), and Björn Ulvaeus and Benny Andersson (Chess). In 2013, he wrote and presented a 52-part series for BBC Radio 2, American Pie, a trawl through the music and musicians of every state. He has won several awards, mainly for the wrong thing or for simply turning up.

Linda Woolverton (Book) wrote the screenplays for Beauty and the Beast (Golden Globe winner and Academy Award nominee for best picture, the first animated film to receive such a nomination), Homeward Bound: The Incredible Journey, The Lion King, Alice in Wonderland (dir. Tim Burton), Alice Through the Lookingglass, Maleficent, and Maleficent: Mistress of Evil (upcoming) as well as the books for the Broadway musicals Beauty and the Beast (Tony Award nomination for best book, Olivier Award for Best New Musical), Elton John and Tim Rice’s Aida, and Elton John’s Lestat. She also wrote the young adult novels Star Wind and Running Before the Wind.

Mark S. Hoebee (Director, Producing Artistic Director) joined the artistic team at Paper Mill Playhouse in 2000. Under his leadership, Paper Mill was presented with the Regional Theatre Tony Award in 2016 and in recent years launched such noteworthy projects as the world premieres of Newsies, in partnership with Disney Theatrical Productions, Honeymoon in Vegas, Ever After, Bandstand, A Bronx Tale, The Honeymooners, and The Sting starring Harry Connick, Jr., as well as the American premieres of the 25th Anniversary Production of Les Misérables, working alongside Cameron Mackintosh, Alan Menken and Stephen Schwartz’s The Hunchback of Notre Dame, and the national tour of The Bodyguard starring Deborah Cox. On Broadway, Mark directed the Actors Fund benefit of The Best Little Whorehouse in Texas starring Jennifer Hudson. He has directed national tours of Victor/Victoria starring Toni Tennille, Dreamgirls, Company, and An Evening of Lerner and Loewe starring Diahann Carroll. His directing credits at Paper Mill include West Side Story; Annie; Mary Poppins; Dreamgirls; Hello, Dolly! starring Tovah Feldshuh; Harold and Maude: The Musical with Estelle Parsons; The Will Rogers Follies starring John Davidson; Meet Me in St. Louis; The King and I; Miss Saigon; Disney’s High School Musical; Peter Pan; Smokey Joe’s Cafe; Oliver!; Damn Yankees; Thoroughly Modern Millie; Curtains; and The Full Monty starring Broadway legend Elaine Stritch. He resides in Glen Ridge with his partner Larry Elardo, Coordinating Broadcast Producer for the CBS Evening News and CBS Sunday Morning, and their children, Stephen and Ashley.

Michael Borth (Music Director). Paper Mill debut. National Tours: Beauty and the Beast (international), The Phantom of the Opera, Man of La Mancha, 25th Annual…Spelling Bee, The Will Rogers Follies, Flashdance, The King and I. Orchestrator and conductor of the original Off Broadway run of The Marvelous Wonderettes, and arranger and orchestrator of its sequels, Wonderettes: Caps and Gowns and Wonderettes: Dream On. Over 50 regional credits including Reprise, Sacramento Music Circus, Musical Theatre West, Music Theatre Wichita, Ogunquit Playhouse, and Pasadena Playhouse. Musical director of the NYC concert and cast recording of Ryan Scott Oliver’s 35mm.

Rick Sordelet (Fight Direction). 44 Broadway productions, including Disney’s The Lion King, Beauty and the Beast, Tarzan, The Little Mermaid, and Aida. He has staged the fights for the opera Cyrano de Bergerac starring Placido Domingo at the Metropolitan Opera, The Royal Opera House, and the LaScala in Milan, Italy; and for over 40 productions on five continents. Film: The Game Plan starring Dwayne “The Rock” Johnson; Dan in Real Life starring Steve Carell and Juliette Binoche; and Hamlet starring Campbell Scott. He served as the chief stunt coordinator for Guiding Light and staged the fights for First Jedi, a CD-ROM for George Lucas. Rick received the Lucille Lortel Award for Sustained Excellence in 2007. He teaches at Yale School of Drama.

Paper Mill Playhouse, a leader in accessibility, will offer audio-described performances for Disney’s Beauty and the Beast on Sat, June 22, and Sun, June 23, at 1:30PM. Prior to these performances at noon, the theater will offer free sensory seminars. Sensory seminars offer an opportunity for patrons with vision loss to hear a live, in-depth description of the production elements of the show and hands-on interaction with key sets, props, and costumes.  There will be a sign-interpreted and open-captioned performance on Sun, June 23, 2019, at 7PM. Paper Mill Playhouse will also present an autism-friendly performance of Disney’s Beauty and the Beast on Wed, June 26, at 1:30PM. This performance is designed specifically for children on the autism spectrum or with other developmental disabilities, and is planned in cooperation with Paper Mill Playhouse’s Autism Advisory Team. The theater environment will be altered for this performance, providing a sensory-friendly, comfortable and judgment-free space that is welcoming to all families. The performance itself will be adjusted with special attention paid to lighting and sound.  For tickets to this special performance, please call the Paper Mill Playhouse box office at 973.376.4343 or click here.

Major sponsors for Paper Mill Playhouse’s autism-friendly performance of Disney’s Beauty and the Beast are The Goren Family & Harmony Helper, and Merck.

Major funding for autism-friendly programs is provided by the National Endowment for the Arts and Wells Fargo.

Free Audience Enrichment Activities for Disney’s Beauty and the Beast

CONVERSATION CLUB: Join us Thu evenings, May 30, June 6, 13, and 20 one hour before curtain for an informal, informative gathering. You’ll learn more about the performance you’re about to see.

THE DIRECTOR’S VIEWPOINT: One hour before curtain, at 6PM, on Wed, May 29, we host a pre-show discussion in the Renee Foosaner Art Gallery.

Q&A WITH THE CAST: After the matinee on Sat, June 22, stick around for a lively Q&A with cast members directly following the performance.