Paper Mill Playhouse acknowledges that our theater stands on the traditional land of the Lenni-Lenape.  We honor the land and the Indigenous people who inhabited it for thousands of years before European settlers arrived.

How It All Began

In 1795, Samuel Campbell opened The Thistle Paper Mill on the site of the current Paper Mill Playhouse. Destroyed by a fire in the 1860’s, it was rebuilt and continued to operate for another 35 years. In 1934, Antoinette Scudder purchased the then-derelict paper mill with the vision of creating a permanent repertory theater. 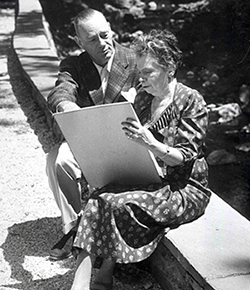 In November of 1938, Paper Mill Playhouse opens its doors with The Kingdom of God, a play by Martinez Sierra. Sixteen plays are produced over the next two years.

In addition, Frank Carrington and Antoinette Scudder put on the First New Jersey Theater Festival and established a theater school for children. “The Paper Miller” becomes the Morris-Essex Railroad’s solution for limited travel due to gas rationing during war years. Patrons picked up the train in Newark and the railroad arranged to pick up audience members after the curtain went down at Paper Mill Playhouse.

In addition to operettas, more musicals and plays are incorporated into the Playhouse’s repertoire and guest directors are frequently employed along with many stars of stage and screen. Angelo Del Rossi is hired as the casting director and later becomes Associate Producer. Antoinette Scudder, the matriarch of Paper Mill Playhouse, passes away in 1958 leaving behind a legacy as an arts philanthropist.

By the end of the 1960s, Paper Mill Playhouse had produced 145 productions.

The star power continues through the 70’s. Multiple Tony® Award and Golden Globe® Award winner Bernadette Peters performs in Dames at Sea. Mickey Rooney stars in A Midsummer Night’s Dream and Helen Gallagher reprises her Tony Award-winning role in No, No, Nanette. Future Dirty Dancing star Patrick Swayze dances in the chorus of The Music Man, Anne Meara and Jerry Stiller headline Prisoner of Second Avenue, and Ann Miller stars in Anything Goes. 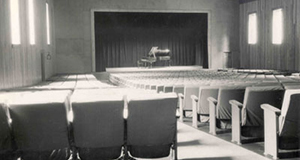 Sadly, a major fire burns Paper Mill Playhouse to the ground on January 14, 1980. However, in 1982 – the new Paper Mill Playhouse opens with an opening night gala that mixes celebrities and longtime Paper Mill supporters in the newly built theater, complete with accessible seating and an infrared listening system. Jason Robards and Coleen Dewhurst headline the amazing cast of You Can’t Take It With You which then transfers to The Kennedy Center and on to Broadway where it is filmed for “Broadway on Showtime.”

The mid-80’s mark the start of sign-interpreted and audio-described performances and sensory seminars. Robert Johanson is appointed Artistic Director of Paper Mill Playhouse. Johanson creates new works, revisits classics, and adapts literature for the stage during his time at Paper Mill Playhouse.

In 1986, the National Endowment for the Arts ranks Paper Mill Playhouse second in the nation for artistic excellence, surpassed only by the Metropolitan Opera in New York City. The star power continues with Emmy Award winner Tony Randall performing in Two Into One and Lee Roy Reams heading the cast of La Cage Aux Folles.

The critical acclaim continues. In 1998, Ann Miller and Donna McKechnie lead the all-star cast of the acclaimed revival of Stephen Sondheim’s Follies, generating international attention, and Gypsy starring Betty Buckley and Deborah Gibson is named one of the “Top Ten Theatrical Events of the Year” by USA Today. In 1999, Paper Mill Playhouse’s production of Crazy for You is nationally broadcast on the PBS “Great Performances Series” and nominated for an Emmy Award, and Tony Award winners Christine Ebersole and Kelly Bishop star in Mame.

In 2007, a financial crisis causes Paper Mill Playhouse to launch a “Save the Theater” campaign to enable the 2006-2007 season to finish its productions of Seven Brides for Seven Brothers and Pirates!. The community comes together and donates more than one million dollars in four weeks.

In June of 2008, Millburn Township votes to purchase Paper Mill Playhouse’s four-acre site and buildings for nine million dollars, marking the first time in New Jersey’s history that a municipality has supported an arts organization at such a high level. That same year Mark S. Hoebee is promoted to Producing Artistic Director and is joined in 2010 by Managing Director Todd Schmidt in taking the reins of the theater. Under their leadership, Paper Mill begins to enjoy a renaissance and embarks on a series of partnerships with commercial entities to present new musicals while still producing and reviving the classics.

Paper Mill’s productions of Happy Days, the Musical; Little House on the Prairie; and the critically acclaimed new 25th Anniversary production of Les Misérables all launch national tours. And in an unprecedented partnership with Disney Theatrical Productions, the 2011-12 Season opens with the world premiere of Newsies! – which subsequently opens on Broadway the following spring. The Playhouse also continues to be at the forefront of accessibility and, in keeping with its “Theater for Everyone” credo, is the first theater in the country to present “Sensory-Friendly Performances” for children on the autism spectrum and with developmental disabilities.

In the fall of 2013, Paper Mill celebrates its 75th Anniversary as one of the oldest regional theaters in the country by kicking off the season with the world premiere Broadway-bound production of Honeymoon in Vegas starring Tony Danza. Premieres and commercial producing partners fast become part of the Paper Mill legacy with the acclaimed Hunchback of Notre Dame, another partnership with Disney Theatrical and another beautiful score by the esteemed Alan Menken, and Ever After, the “real” Cinderella story. The 2015-16 Season is one of the best in our theater’s storied history. Two Paper Mill world premieres, A Bronx Tale and The Bandstand, will make it to Broadway. The season culminates in Mark S. Hoebee’s stunning West Side Story and the ultimate accolade: Paper Mill is awarded the 2016 Regional Theatre Tony Award! The story continues with the U.S. Premiere of The Bodyguard the Musical, which launches an extensive North American tour in 2017.