Paper Mill Playhouse’s children’s show programming for the 2019–2020 season including special performances for students with autism or other developmental disabilities. Paper Mill’s Children’s Shows are charming, delightful, and educational performances filled with audience participation and adventure. Children’s Shows take place on select Saturdays and Sundays at 10AM. All tickets are just $15.

“What better way to spend a weekend morning than introducing your child to the live theater experience with characters and stories they love?” said Mark S. Hoebee, Producing Artistic Director at Paper Mill Playhouse. “These performances are accessible to all with tickets only costing $15.00 for any seat in the house.”

The series will also offer special performances for students with autism and other developmental disabilities.  A special performance of Dog Man: The Musial (Sunday, December 8, 2019) and Charlotte’s Web (Sunday, June 14, 2019) are designed specifically for children on the autism spectrum or with other developmental disabilities. The autism-friendly performance is planned in cooperation with the Paper Mill Autism Advisory Team. The theater environment will be altered for this performance, providing a sensory-friendly, comfortable, and judgment-free space that is welcoming for all families. Additionally, Paper Mill Playhouse will host a free open house titled “Meet Your Seat” as an opportunity for children who are new to theater experiences to visit the theater space before the show. For more information, call the box office at 973.376.4343. 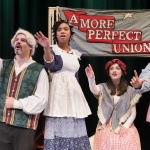 A MORE PERFECT UNION
Sat, Oct 26 at 10AM
The story of “A More Perfect Union” begins in Boston, 1773 and ends at the Constitutional Convention in Philadelphia, 1787. The play covers the critical and tempestuous time in our nation’s history in which revolution, war, and a failed attempt at self-governing finally led to the writing of the U.S. Constitution and the birth of our country as we know it today. 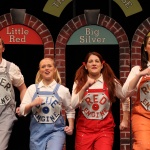 LITTLE ENGINE THAT COULD EARNS HER WHISTLE
Sat, Nov 30 at 10AM
Little Blue Engine dreams of someday leaving the train yard to pull the big cars on the main line track. But can she convince Big Silver that she is worthy of being a main line engine? ArtsPower’s dynamic, song-filled adventure portrays Watty Piper’s timeless tale about hard work, determination, and loyalty. 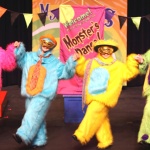 THE MONSTER WHO ATE MY PEAS
Sun, Dec 1 at 10AM
The funny and poignant story of a young boy who doesn’t want to eat his peas. When a crafty monster appears underneath his kitchen table, the boy is ready to make a deal with the monster. But, when the monster raises the stakes, will the boy refuse the monster and make the difficult decision to face his own fears? Children and adults alike will be entertained and engaged by this wonderfully written tale about the value of will power. 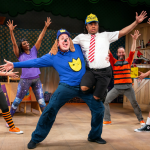 DOG MAN: THE MUSICAL
Sat, Dec 7 at 10AM
A hilarious new production based on the worldwide bestselling series from Dav Pilkey, the creator of Captain Underpants. Best buds George and Harold have been creating comics for years, but now that they’re in 5th grade, they figure it’s time to level up and write a musical based on their favorite character, Dog Man, the crime-biting sensation who is part dog, part man, and ALL HERO!!

DOG MAN: THE MUSICAL…… AUTISM FRIENDLY PERFORMANCE
Sun, Dec 8 at 10AM
A hilarious new production based on the worldwide bestselling series from Dav Pilkey, the creator of Captain Underpants. Best buds George and Harold have been creating comics for years, but now that they’re in 5th grade, they figure it’s time to level up and write a musical based on their favorite character, Dog Man, the crime-biting sensation who is part dog, part man, and ALL HERO!! 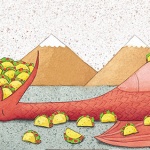 DRAGONS LOVE TACOS
Sat, Dec 14 at 10AM
A collection of stories including based on popular books including “Dragons Love Tacos,” “Interrupting Chicken,” “The Dot,” “Mercy Watson Goes for a Ride,” and “Cowgirl Kate and Cocoa School Day.” 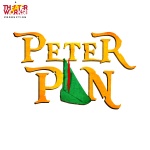 PETER PAN
Sun, Dec 15 at 10AM
TheaterWorksUSA’s production of Peter Pan was originally developed for London’s Royal Shakespeare Company. In the spirit of the original tale, this production tells the story through the eyes of six children living in Edwardian England. Together, they transform the Darling family’s nursery into Neverland, turning pillows into clouds, long-johns into shadows, an ironing board into a ship’s plank, and antique snowshoes into a crocodile’s snapping jaws. This enchanting production celebrates childhood and captures the magic of the imagination. 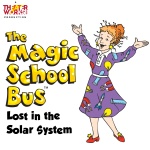 THE MAGIC SCHOOL BUS: LOST IN THE SOLAR SYSTEM
Sat, April 18, 2020 at 10AM
When the class gets lost on the way to the planetarium, Ms. Frizzle saves the day by blasting into outer space for an epic interplanetary field trip!  But when rivalries both old and new threaten to tear the students apart, our young heroes must learn to pull together or risk getting forever lost in the solar system. Hop on the Magic School Bus for a ride in this new musical adaptation based on the original book series published by Scholastic. 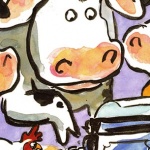 CLICK CLACK MOO
Sun, April 19, 2020 at 10AM
When his granddaughter Jenny comes for a visit, Farmer Brown declared the farm a “tech-free zone.” Tell that to the shivering cows in the barn who use her computer to type messages requesting blankets in this hilariously “mooooo-ving” new musical! 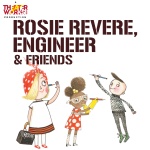 ROSIE REVERE ENGINEER
Sat, April 25, 2020 at 10AM
Sun, April 26, 2020 at 10AM
A fun new musical based on the books Rosie Revere, Engineer, Iggy Peck, Architect and Ada twist Scientist by Andrea Beaty which spotlights the STEM curriculum (focusing on science, technology, engineering and math). 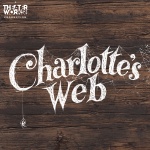 CHARLOTTE’S WEB
Sat, June 13, 2020 at 10AM
Based on E.B. White’s loving story of the friendship between a pig named Wilbur and a little gray spider named Charlotte explores true meaning of friendship.

CHARLOTTE’S WEB…… AUTISM FRIENDLY PERFORMANCE
Sun, June 14, 2020 at 10AM
Based on E.B. White’s loving story of the friendship between a pig named Wilbur and a little gray spider named Charlotte explores true meaning of friendship. 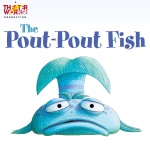 THE POUT POUT FISH
Sat, June 20, 2020 at 10AM
Turn the poutiest of frowns upside down in this new musical featuring whimsical puppets and live performers in a sweeping oceanic adventure. When Mr. Fish sets out on a quest to find Miss Clam’s missing pearl, he discovers there is more to him than his permanently plastered pout.