Based on the 1992 hit film, Sister Act is a feel-good musical comedy smash that sizzles with powerful music, spectacular dancing, and a story brimming with heart. The madcap plot is set in motion when disco diva Deloris Van Cartier witnesses a murder and must go into hiding in a convent—where she clashes, hilariously, with cloistered life. Deloris inspires the sisters with her soulful style, but the church choir’s newfound fame attracts the attention of the bad guys. Featuring original music by Tony and eight-time Oscar winner Alan Menken (Newsies, Beauty and the Beast, Little Shop of Horrors), the musical was nominated for five Tony Awards, including Best Musical. 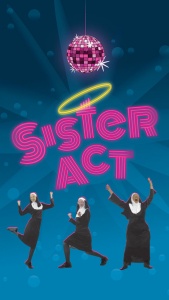 ANTHONY ALFARO (Pablo). Paper Mill debut! National Tours: On Your Feet! (first national), Mamma Mia!. Off Broadway: The View UpStairs (original cast), The Loophole (Public Theater). Regional credits include Miss You Like Hell (Baltimore Center Stage) and Sister Act (Arvada Center, Fulton Theatre, NSMT). As a vocalist Anthony has appeared at the Kennedy Center and is the front man of Tony & The Kiki, whose debut album is to be released later this year.

NICOLE VANESSA ORTIZ (Deloris Van Cartier), from Newark, NJ, is honored to be making her Paper Mill Playhouse debut! Her credits include playing Rusty in Footloose at the Kennedy Center (2019), Sarah in Ragtime at Serenbe Playhouse (2019), the Off Broadway revival of Smokey Joe’s Cafe (2018), and the Leading Lady of Spamilton: An American Parody (2017). She is also the 2012 winner of Wendy’s Next Great Voice on The Wendy Williams Show and was a top 45 finalist in season 5 of American Idol.

JACOB KEITH WATSON (Joey) is thrilled to return to Paper Mill after appearing as Waldo in Benny & Joon last spring. Jacob’s Broadway credits include the most recent revivals of Carousel as Mr. Enoch Snow and Hello, Dolly! starring Bette Midler, as well as the Broadway productions of Violet, The Phantom of the Opera, and Amelie. Other New York appearances include 1776 and Mack & Mabel at Encores! Regional and tour credits include Amos Hart in Chicago and Shrek in Shrek: The Musical, among many others.

JERRY ZAKS (Director) is currently represented on Broadway by Mrs. Doubtfire and the upcoming The Music Man. He has won four Tony Awards and has been nominated eight times; he also has won four Drama Desk Awards, two Outer Critics Circle Awards, and an Obie. Broadway: Meteor Shower; Hello, Dolly!; A Bronx Tale (also at Paper Mill); Shows for Days; Sister Act; The Addams Family; Guys and Dolls; Six Degrees of Separation; Lend Me a Tenor; The House of Blue Leaves; Little Shop of Horrors; Assassins; and many more. He directed the award-winning film Marvin’s Room starring Meryl Streep and Diane Keaton. Mr. Zaks received the SDC’s Mr. Abbott Award for lifetime achievement and is in the Theater Hall of Fame.

STEVEN BECKLER (Production Director) has mounted productions of Sister Act in England, Brazil, and Singapore as well two US touring productions and in Ogunquit, Maine. He directed Guys and Dolls at the old Desert Inn hotel in Las Vegas starring Jack Jones, Maureen McGovern, and Frank Goshen, and at the Ogunquit Playhouse starring Richard Kind, Liz Larsen, and Christian Hoff. He directed the 1991 Paper Mill Playhouse production of Lend Me a Tenor starring Patrick Quinn, Judy Blazer, and Robert Cuccioli. On Broadway Steve has been the original production stage manager of over 35 plays and musicals including Wicked, Footloose, ’Night Mother, and The Dresser.

CHRISTOPHER BABBAGE (Music Director) began his work with Sister Act on the first national tour (associate conductor) and subsequently conducted the second national and Asian tours. He is Music Supervisor for Tuacahn Center for the Arts, where outstanding credits include The Hunchback of Notre Dame, Stephen Schwartz’s The Prince of Egypt, and the upcoming Frank Wildhorn musical The Count of Monte Cristo. Other tours: Smokey Joe’s Cafe, Grease (Asia), Cats (national and Latin America), and Disney’s The Little Mermaid. Other regional: Muny, Arvada Center, Circa ’21, Merry-Go-Round Playhouse. Christopher received Bachelor and Master of Music degrees from SUNY Fredonia.

BINDER CASTING (Casting) was founded by Jay Binder, CSA in 1984. The office has cast over 80 Broadway productions, dozens of national tours and Off-Broadway shows, seasons for more than 25 regional theaters, as well as feature films, episodic television, and commercials. The office has also cast for Encores! at New York City Center since its inception in 1994. The office was featured prominently in the Broadway documentary Every Little Step. Binder Casting is a proud 12-time recipient of the Artios Award for Excellence in Casting. Part of RWS Entertainment Group.

Paper Mill Playhouse, a leader in accessibility, will offer audio-described performances for Sister Act on Saturday, April 25,  at 1:30PM and Sunday, April 26, at 1:30PM. Prior to these performances at noon, the theater will offer free sensory seminars. Sensory seminars offer an opportunity for patrons with vision loss to hear a live, in-depth description of the production elements of the show and hands-on interaction with key sets, props, and costumes.  There will be a sign-interpreted and open-captioned performance on Sunday, April 26, at 7PM.

CONVERSATION CLUB: Join us Thursday evenings, April 2, 9, 16, and 23, one hour before curtain for an informal, informative gathering. You’ll learn more about the performance you’re about to see.
THE DIRECTOR’S VIEWPOINT: One hour before curtain on Wednesday, April 1, a pre-show discussion with the show’s production director in the Renee Foosaner Art Gallery.
Q&A WITH THE CAST: After the matinee on Saturday, April 25, stick around for a lively Q&A with cast members directly following the performance.
Paper Mill Playhouse Education & Outreach are proudly sponsored by The Goren Family & the Harmony Helper App.